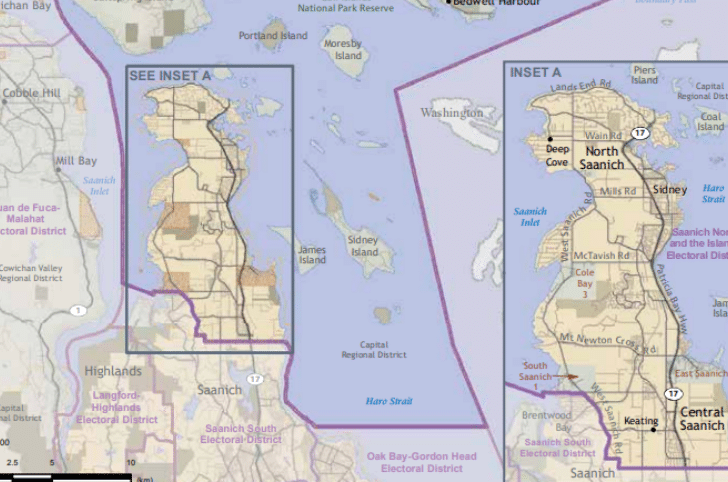 In October 2021, the provincial government struck an Electoral Boundaries Commission to review electoral district boundaries and make recommendations with the goal of ensuring that the weight of all British Columbians vote is equal. Among the boundary realignments the Commission proposed adding six new electoral districts, expanding the Legislative Assembly from 87-93 seats.

The Commission looks at population and geography, as well as other factors such as communications and transportation.

In October 2022, the Commission published its preliminary report and will begin hosting public information sessions to give British Columbians the opportunity to offer feedback about their recommendations.

The Commission proposes changes to the Saanich North and the Islands riding by removing the majority of Brentwood Bay (south of Stelly’s X Road and west of West Saanich Road) adding it to the Saanich South electoral district.

Saanich North and the Islands

This electoral district includes much of Central Saanich, as well as North Saanich, Sidney and the Southern Gulf Islands. Moving the community of Brentwood Bay from this riding into Saanich South, as we propose, creates room for the anticipated population growth in this riding. (Excerpt from P.51 Commission preliminary report)

For clarification, all of Central Saanich, not “much of Central Saanich,” is in Saanich North and the Islands. This proposal will add several thousand people to Saanich South. The Commission argues this is to create space for potential growth in the Saanich North and the Islands. It will be interesting to see if 6,000-10,000 people move into our riding in the next decade as is predicted by this recommendation.

The Commission is accepting written submissions and hosting a series of town hall meetings to hear from British Columbians about the proposed changes.

For residents in the Greater Victoria area that meeting is on Monday, October 31, 2022, at the Victoria Convention Centre.

You can also make a written submission to offer feedback in the process.