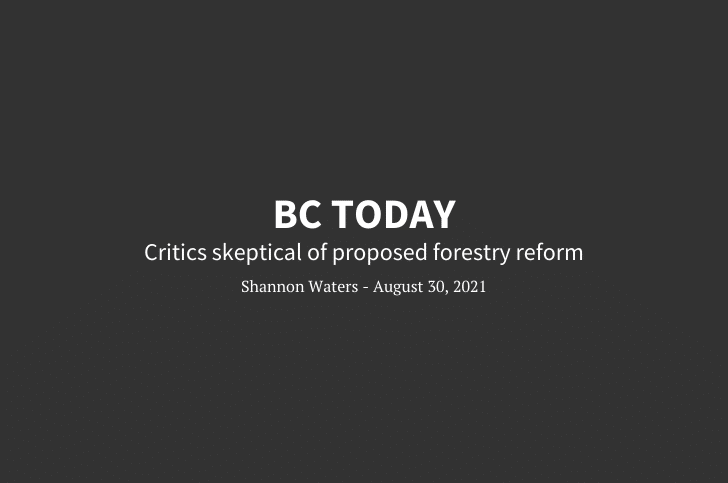 Article by Shannon Waters published on Politics Today on August 30, 2021.

The NDP government has made big promises when it comes to the future of forestry in B.C., but some are skeptical its “intentions paper” on forestry modernization will lead to the significant shift the government is promising.

“We’re committed to a bold reorientation of forestry policy, away from the pursuit of volume and toward the conservation and reconciliation principles of adding value to our forests,” Premier John Horgan said when he unveiled the paper in June.

The document outlines 20 policy intentions to shift B.C.’s forest industry toward a more sustainable future, one “where Indigenous peoples are more involved” in the sector “than they are today.” That includes doubling the share of forestry tenures held by First Nations to 20 per cent.

“We’ve yet to see any legislative reforms to any great extent in forestry, whether it be tenure or not,” Green Party MLA Adam Olsen told BC Today. “Every action so far, every promise so far has been to push this conversation just another six months, just another year.”

The BC First Nations Forestry Council has also been critical of the document, saying it doesn’t go far enough to address Indigenous interests.

“[It] missed the mark from a First Nations’ perspective — we are not talking about improved consultation and accommodation, it’s much more than that,” said Robert Phillips, one of the political executives of the First Nations Summit, shortly after the intentions paper’s release. “We need B.C. to step up to legislate legal requirements for First Nations to be part of decision-making in forestry from improved tenure reform, revenue sharing, land-use planning, and value-added investments.”

The council’s own forests strategy, released in 2019, proposes reforms to strengthen shared governance and revenue as well as tenure reform. Despite participating in that strategy’s development, the province has not committed to endorsing or enacting it.

Liberal Forests critic John Rustad, who served as Aboriginal relations minister, says the NDP’s moves on forestry so far have been muddled.

“What I’m seeing to date is a lot of words,and it seems they don’t quite know how they’re actually going to do it,” he said.

Olsen says First Nations should hold at least half of provincial forestry tenures.

“At the very least, it’s still 30 per cent less than what the courts are saying Indigenous people are entitled to,” he told BC Today, calling the province’s promise “a kind of doublespeak.”

As it currently stands, B.C.’s forestry tenure system is “hamstrung by concentrated forest tenure holdings,” according to ministry officials. Five forestry companies currently hold about half of all available tenures in B.C.

The province also has more than 130 forest consultation and revenue-sharing agreements with Indigenous nations and bands in the province, most of which have been renewed or signed under the current NDP government — 46 of them this year alone.

Olsen argued that these agreements are “a contradiction” to the NDP’s commitment to implementing the Declaration on the Rights of Indigenous Peoples Act (DRIPA) passed in 2019.

“These are not agreements that reflect or represent sovereignty or title … they’re not agreements that open the door for Indigenous nations to take a look at the land base they have title over or even recognized titles that matter,” Olsen said. “We want to tinker on your territory — here’s a paltry sum of money in order to allow us to do that.”

The agreements require First Nations to “make known their community economic and social priority to the provincial government,” which Olsen interprets as “a reflection of that racist belief that Indigenous people cannot be trusted with land and money.”

“Why would it be the business of a provincial government, what the priorities are, necessarily, of an individual nation?” he said.

Other clauses bar Indigenous signatories from doing anything to “frustrate, delay, stop or otherwise physically impede or interfere with provincially authorized forest activities” and stipulates to “promptly and fully co-operate with” and support the province “in seeking to resolve any action that might be taken by a member of a First Nation that is inconsistent” with the agreement’s terms.

“Indigenous nations are not allowed to speak out against them,” said Olsen, calling the documents “muzzle agreements” that force Indigenous leaders to police their communities in order to abide by the terms of the provincial agreements.

“The outcome is exactly as the provincial government intends, which is division within our communities, chaos within our communities and defensive chiefs and councils who are trying to do their best to manage communities in poverty with very, very few resources,” he told BC Today. “When the provincial government comes to the table with an agreement like this to sign, saying ‘look, you can get something or you can get nothing, you pick’ — I hardly think you can suggest it is a fair situation.”

The “free, prior and informed consent” standard set out in DRIPA can’t be achieved under these circumstances, according to Olsen.

Rustad points out that the issue of Indigenous rights and title is tricky in B.C. where the treaty process is ongoing with most First Nations.

“Until there is an agreement — whether it’s a treaty or otherwise — or there’s a court case, title is not defined,” he said, adding that DRIPA “muddies the waters” on issues of title.

“It doesn’t clarify things,” he said. “There is very good case law in terms of how Indigenous rights need to be addressed, and there’s a negotiation process that needs to be followed in terms of how title should be addressed. But [DRIPA] seems to have taken a very different approach than what the courts have laid out, and I think quite frankly it makes things more confusing … in terms of the ability to be able to reach agreements that are mutually beneficial.”

Issues of Indigenous rights and title are “complex” and “hard to simplify,” per Rustad, who said he is looking forward to the province’s promised legislation on forestry reform this fall.

The upcoming legislation is expected to be informed by the province’s first phase of consultation on the June intentions paper, which focused on boosting participation in the sector, especially among First Nations.

A statement from the forests ministry acknowledged that the forest consultation and revenue sharing agreements the province continues to use “are out of date” and noted that the draft action plan to implement DRIPA includes “building a new fiscal relationship that supports the right of self-government, and co-developing new policy frameworks for resource revenue-sharing.”

The draft action plan is expected to be finalized this fall.

← We need courage and conviction to address climate emergency! Injunction denied! Courts should not be at the centre of forestry politics →