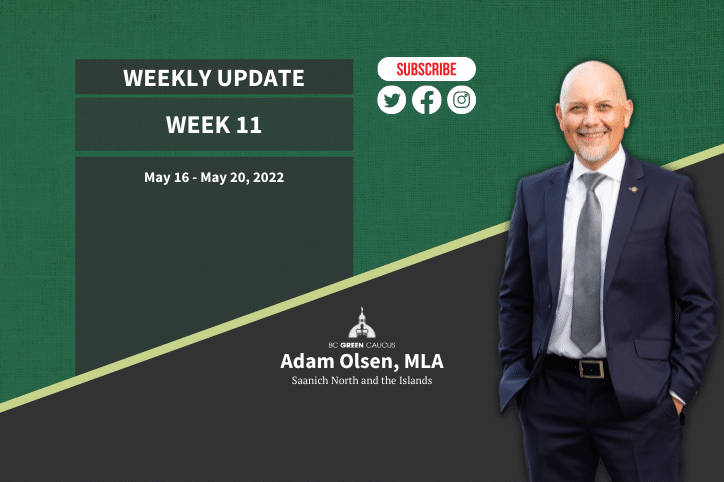 This was a challenging week for me as a legislator. With the one year anniversary of the public acknowledgement of the 215 unmarked grave sites at the Kamloops Indian Residential School just a few days away, Premier John Horgan and Minister Melanie Mark announced the $800 million rebuilding of the Royal BC Museum.

This activated in me a range of deeply held emotions. First, it was sadness, then frustration and anger. Those emotions spilled out into the public in Question Period on Wednesday and my response to Hon. Murray Rankin’s Ministerial Statement regarding the Kamloops announcement, in several media stories and an editorial published in Daily Hive (see below).

Few others in the legislative Chamber have survived the residential school trauma. Even fewer have been involved in repatriating items from a western museum. Because of those personal experiences, my relationship with museums has changed. There are so many important items from Indigenous communities across North America locked away in the basement of museums. They should not be viewed as items from the past, they are culturally relevant today.

While the BC NDP government proposes to build a grand monument to our “collective history” in Victoria’s inner harbour, what cannot be overlooked is how those museum collections were collected. Just as residential schools, the collection of Indigenous “art” is also a sordid history.

Many of the items are not art. They are items of cultural significance, innovative technologies, and ancestral remains. Indigenous people should be the ones to determine where and how they will be shared, if at all.

The turmoil at the Royal BC Museum has been brewing for a couple of years now. There was the departure of the former chief executive officer, and the arrival of a new one, public accusations of a toxic and unsafe work environment for Indigenous employees, and Minister Mark’s announcement that the “Old Town” and “Discovery” exhibits would be closing as an act of decolonizing the most colonial part of the storytelling of our history. Now, this announcement is predicated on seismic vulnerability, and an act of reconciliation.

This has been a public relations disaster for Minister Mark, Premier Horgan and their government. The capital construction of a new museum will cost nearly a billion dollars, take nearly a decade, and when they announced the project they didn’t so much as have an image to stoke the imagination of future museum goers, never mind a business case to reinforce their decision.

What did they expect? British Columbians would be so overwhelmingly appreciative that they wouldn’t ask? Well, the government botched that too. The growing public angst is focused on the collapsing healthcare system, not a new museum.

It feels like the announcement of a new museum was so poorly thought out that government was scrambling to distract and divert attention away from the state of healthcare, or perhaps Site C. Premier Horgan made an impromptu visit to the dam last week, it’s the other mega-project under construction, and the $16 billion price tag is twice what it was supposed to cost.

Pardon British Columbians if we are skeptical about this government’s ability to contain the costs on these massive public projects.

On Thursday, the BC College of Family Physicians hosted an MLA breakfast and the grassroots group BC Health Care Matters organized a rally on the legislative steps. Hundreds of doctors, allied health practitioners and British Columbians attended.

I was thankful to connect with more health professionals from Saanich North and the Islands to hear about practical solutions that could be implemented right now to stop the bleeding in our primary health care system.

Just as Health Minister Adrian Dix noted at the morning breakfast, when COVID-19 hit our province more than two years ago, his Ministry was able to quickly create new billing codes in our antiquated fee-for-service remuneration system.

The current payment model for family doctors rewards quantity of patient visits over quality of patient visits. As was pointed out to me, the “service” is a fifteen minute visit and the fee is about $30. There aren’t codes to apply an appropriately scaled fee for when the service delivered is more complex. So, create new billing codes that allow doctors to bill the province for the work they are doing.

As most family doctors work under this scheme, and the rates have not changed in years but the costs of operating their offices continues to go up each year, the solutions are obvious. Minister Dix needs to make the billing more sophisticated and provide short-term support for their overhead costs.

The Assembly is adjourned this coming week due to the the Victoria Day holiday on Monday. We will return for one final week of this Spring session before adjourning for the summer in early June. There will be one more weekly newsletter on June 5th and then I will deliver monthly newsletters until the next session in the Fall.

I will be on all the Islands this summer and around my office in Sidney. Details will be announced in the coming weeks.

If you need advocacy from our office, have any questions or concerns, please provide your feedback at Adam.Olsen.MLA@leg.bc.ca or 250-655-5600.

The BC NDP need to get their priorities straight.

They announced an $800 million new Royal BC Museum, when millions of British Columbians are struggling to keep up with the increasing costs of basic needs like food, transportation and housing. And, for months British Columbians have been demanding the BC NDP address the collapsing healthcare system.

Initially, the museum project was framed as an effort to decolonize the institution. Then it was about an old building that is seismically unsafe. Then when the announcement came on Friday May 13th it was an act of reconciliation.

Building a new museum is not an act of reconciliation. In my opinion, it is a power play. The RBCM has had no issues with their natural history or settler-colonial exhibits, their problem is how they relate to Indigenous People.

A new building will not solve this institutional rot and the BC NDP approach has been a disaster!

As we approach the one year anniversary since Kúkpi7 Rosanne Casimir (Tk’emlúps te Secwepemc) announced the preliminary findings of 215 graves of children at the former Kamloops Indian Residential School I stood and marked the occasion in a response to a Ministerial Statement delivered by Minister Murray Rankin.

This is an important opportunity to check in on the progress made on the promise of reconciliation and the reality for residential school survivors and their families.

On Thursday, MLA Doug Clovechok (Columbia River-Revelstoke | BC Liberal Caucus) introduced a private members bill that would allow Indigenous people in British Columbia to use their traditional names on provincial documents and records. I have raised this issue in estimates earlier this year and last, and was told by the Minister of Citizens’ Services it was a “very complex” and that “government was working on it”. The province has maintained an archaic system, and the work to update their systems to recognize the necessary characters has been slow. I raise my hands to Doug for highlighting this situation again.

The below news stories contain quotes or references from my work on issues this past week.

A reminder from my team in the Saanich North and the Islands of the consultation for Budget 2023 has already started.

Every year, the Select Standing Committee on Finance and Government Services holds a public consultation on the next provincial budget.

This year, the consultation will take place between May 30, 2022, and June 24, 2022. British Columbians will be invited to share their thoughts, ideas, and priorities.

← Column: $800 million Royal BC Museum plan is politics masquerading as reconciliation What is BC NDP doing to protect workers from poor air quality due from wildfires? →