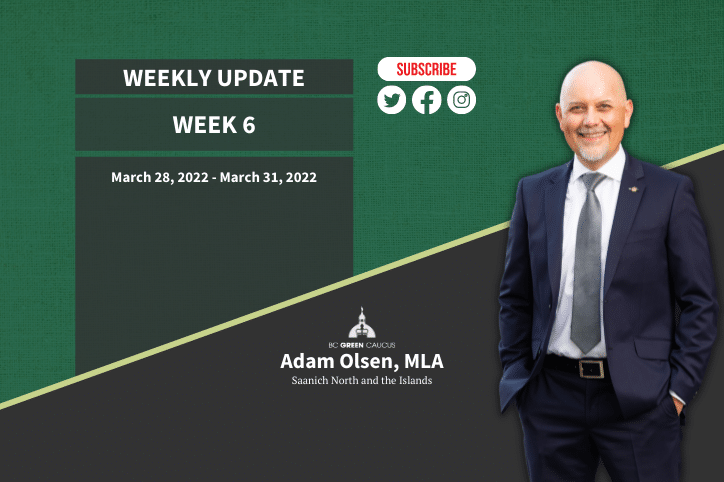 It was a busy week for me in the legislature. With the Police Act Committee meeting on Monday and Wednesday evenings it made for long days.

The regular practice is for alternating Members of the government and opposition to debate the motion, five minutes each, and then debate adjourns with no vote on the motion.

This week Sonia stood near the end of the session and stated “We’ve heard, from the official opposition, strong support for LNG. We’ve heard, from the government, some kind of effort to square the circle of growing emissions in this province since they have become government, of increasing their subsidies to the LNG industry and getting us nowhere near to the targets that we are supposed to get, with no recognition that the plan they keep talking about does not account for LNG and cannot be achieved with LNG as a giant hole in the middle of it. Clearly, members can stand and say almost anything in this debate, with no accountability, because we don’t vote on these motions. Let’s have that accountability. I move that the question be put.”

Sonia called the question. Votes on the question are at 6:00pm. First, the Members must vote on whether they will vote on the Motion, in this case the motion from MLA Bernier.

We voted. The Greens and Liberals voted to allow the vote on his motion. The BC NDP voted against allowing the vote where they would have to take an official position of support on LNG.

It is a bold move in a democratic Assembly for the governing BC NDP to stand up Member after Member to talk about a motion, making conflicting comments on the record, and then when asked to vote on the record, they use their majority to block it.

On Wednesday, Minister Murray Rankin (Indigenous Relations and Reconciliation) tabled the Declaration Act Action Plan. It is a requirement of the Declaration on the Rights of Indigenous Peoples Act that the Assembly passed unanimously in November 2019. This is an important step forward, see more below.

This week, I rose in second reading debate on two Bills – Bill 14: Wildlife Amendment Act, 2022 and Bill 12: Property Law Amendment Act, 2022. I had two opportunities in Question Period where I asked about BC NDP support for LNG and glyphosate spraying on forest lands.

The BC NDP government continues to celebrate, support and subsidize the fossil fuel industry.

I asked this question only 30 minutes after the BC NDP celebrated with Indigenous leaders on the floor of the Chamber the tabling of an 89-point action plan required by the Declaration Act.

The Minister ignores the threats to Indigenous women, girls and 2-spirit people, ignores the climate emergency and justifies the continued use of force against Indigenous Hereditary Chiefs in their own territory.

Sonia and I have received more than 2000 emails about the spraying of glyphosate, a carcinogenic pesticide, on our forest lands.

The practice kills native plant species that are competing with trees and ultimately harvest volumes for the forestry industry. As Minister Katrine Conroy (Forests) said, “the glyphosate use in forestry has to comply with B.C.’s Integrated Pest Management Act.”

In British Columbia we regard native plant species as pests. Even though these species have been, and continue to be, relied on by Indigenous harvesters for staple food and medicines since time immemorial. Again, during a week when we celebrate steps toward reconciliation, we see this total disregard for Indigenous ways of being and living.

This is done of course because the provincial government values the ability of the forestry industry to maximize timber harvest volumes over Indigenous rights.

No Statement this week.

Section 4 of the Declaration on the Rights of Indigenous Peoples Act passed in November 2019 requires the government to table an Action Plan.
Government tabled their 89-point plan on Wednesday. They are a collection of actions each Ministry is committed to taking, steps in our reconciliatory walk.

Minister Murray Rankin (Indigenous Relations and Reconciliation) offered a Ministerial Statement. MLA Michael Lee, delivered a response as BC Liberal critic, and I responded on behalf of the BC Greens.

Chief Don Tom of the Union of BC Indian Chiefs, Cheryl Casimer of the First Nations Summit and Chief Jerry Jack of the Assembly of First Nations provided a response on the floor of the Chamber.

The action plan and the annual report, are key accountability mechanisms to ensure the provincial government follows through on their commitment to Indigenous People.

I have heard many promises. Many words.

This is an action plan and the metrics of success will be in the tangible improvement of life in British Columbia for Indigenous People.

Will these actions lead to the objectives of the Declaration Act?

Only time will tell.

In my second reading reflections on Bill 14 I shared stories from my uncle J,SIṈTEN (John Elliott).

The content comes from an interview J,SIṈTEN did (Four stories of how things came to be) with the W̱SÁNEĆ Leadership Council.

This Bill finally allows the provincial government to recognize sheltering agreements between Indigenous Nations that allow members to hunt in each others territory, and to regulate how confidential information from Indigenous Nations is collected, maintained and disposed of for the purposes of wildlife management and hunting.

The stories that I shared are one example of how we can understand and relate to our natural surroundings in a good way.

These are positive steps forward. The Wildlife Act needs more than this tinkering around the edges though.

Look no further than the Forests Ministry spraying forest lands with poison to kill food sources relied on by wildlife for their survival. Why? To maximize timber harvest yields at the expense of everything else.

Unfortunately, I was not able to get the video for my second reading comments on Bill 12 by the end of the week. View it by clicking the link below.

Bill 12 is the legislation promised by Minister Selina Robinson (Finance) last Fall to introduce a “cooling off period” which government is now calling a “Homebuyer Protection Period.”

This Bill is another example of the BC NDP using enabling legislation to give them the power to create regulations later. This is an affront to our democratic process. While this Bill has only a few sections, I suspect there will be a lot of debate at committee because there are no details.

Initially, government floated the idea making it sound like an initiative to cool B.C.’s famously hot real estate market. Now they are framing it as a consumer protection effort.

Minister Robinson, and other BC NDP Members, reminded B.C.ers that buying a home is the biggest purchase people make. Yet, they are asking their elected representatives to vote on a Bill with literally no detail. All detail will all come later, secretly, in regulation. Astonishing.

I hope you will watch this speech on the importance of democratic process and how Bill12 is an abuse of power.

On March 29th, MLA Furstenau and I asked questions of Minister Popham (Minister of Agriculture).

Public engagement began in Vancouver on Friday March 3, 2022 with the first presentations to the Committee.

Media coverage and events from this week.