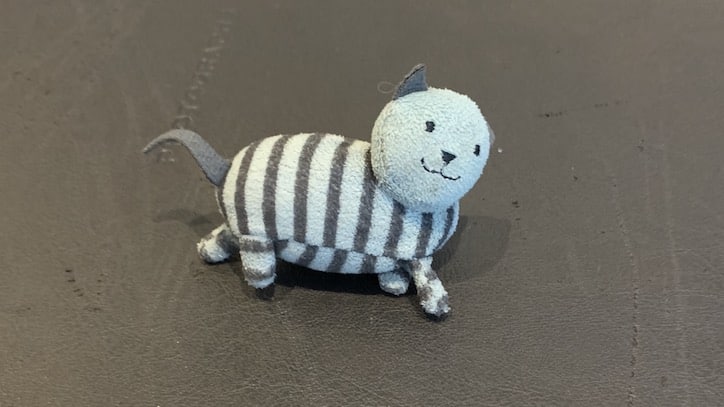 For the past several months a drama’s been unfolding in the Olsen household!

Where did Kitty go?

As the weeks passed there was an inclination to turn the open case into a cold case, but there was also a feeling that one day Kitty would show up.

For context, when Kitty went missing she was at the top of the heap in the complex network of relationships that’s evolved amongst the stuffies in my daughter Ella’s room.

At the time of her disappearance, despite her diminutive size, Kitty ruled the room. She had the best spot on the bed next to Ella and was responsible for keeping order, managing communication and ensuring everyone had just the right amount of love.

Where did Kitty go?

So you can imagine what happened when one day this past Spring Kitty went missing. We desperately turned Ella’s room up-side-down. Nothing. Not so much as one faint purr or meow. Kitty was just gone!

Eventually life resumed but it just wasn’t the same without Kitty. Theodore the Christmas Turtle was elevated in the hierarchy and forced to assume a new leadership role. He worked beside Ella’s longest-serving confidant Beary, Moonbeam the Floppy-eared Rabbit and Mr. Bear, the four of them picked up the slack left by the larger-than-life Kitty.

There was always a belief that Kitty would be found safe and sound. This weekend our hopes, no matter how faint, were realized. As it turns out Kitty was home all along. She was just taking a very long nap in the fold of the unfinished curtain.

It has been determined that Kitty will return to her leadership role but what is yet to be sorted out is how open will she be to sharing those benefits and responsibilities with Theodore.  For now, we celebrate Kitty’s survival!