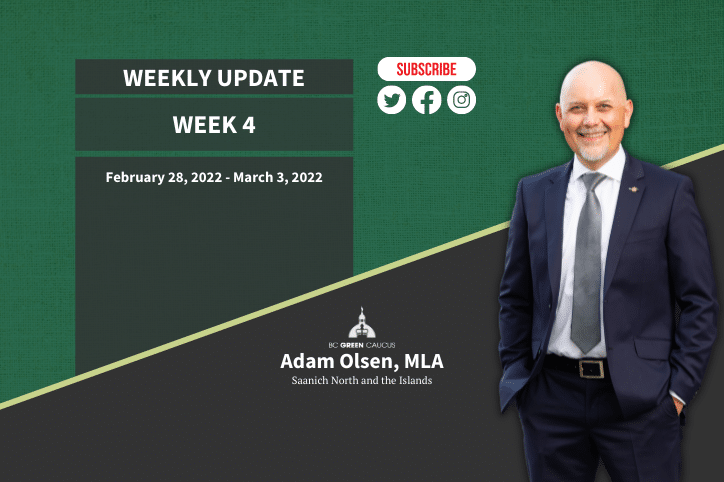 Welcome to my weekly update for March 5th, 2022! With a half dozen Bills tabled and awaiting debate, the BC NDP continued Second Reading debate on Budget 2022 for most of the fourth week of this Spring session. I delivered my budget response speech (see link below) on Tuesday.

On Thursday morning Hon. Selina Robinson, Minister of Finance, finally moved the motion to send the budget to the next stage of review and debate – Committee of Supply.

Starting next week, Ministers and Opposition critics will begin a much more detailed review of each Ministries budgets. This is an opportunity to better understand how each Minister will deliver on the mandate given them by the Premier, and the service plan that directs the work of their Ministry.

On Thursday afternoon, we began the detailed debate in the Committee of the Whole House on Bill 5: Workers Compensation Amendment Act (2022), an Act to strengthen laws and regulations for the asbestos abatement industry.

Once that process was complete we were scheduled to begin Second Reading debate on Bill 7: Coastal Ferry Amendment Act (2022), an Act that substantially changes the powers of the provincial government, as the sole shareholder, over the BC Ferries Corporation. However, Bill 7 was pulled from the schedule with no explanation and remarkably Members went back to debating the Throne Speech.

With four weeks of this 3rd Session already behind us, a half dozen Bills on the table, more than two dozen Bills yet to come and Estimates for each Ministry yet to begin, House management continues to be a struggle for this government.

I raised this issue at the end of the 2nd Session last Fall when the government moved time allocation to limit debate on important forestry and freedom of information amendments, using their majority to push their legislation through our democratic process. This is the result of poor house management.

In my response to Budget 2022, I spend a considerable amount of time acknowledging the deterioration of important processes in our democratic Assembly. When the house is poorly managed, whether it is intentional or not, it creates chaos and limits debate. Laws are passed without deep and thoughtful consideration. I fear that eight sitting weeks from now this government will be scrambling and they will be forced to use time allocation and closure to the shutter the legislature by their self-imposed end-date in June, and I will once again be pointing to the unnecessary time-wasting at the beginning of this 3rd Session. Let’s hope I am wrong.

Monday, I asked a question about where the funding for Indigenous reconciliation and conservation financing will come from in this year’s budget.

On Wednesday, I asked whether British Columbia will insist companies we subsidize stop using steel produced by Russian oligarchs.

No Statement this week.

On Tuesday I gave my Budget 2022 response speech.

In this speech I cover a range of topics. In the beginning I spend a considerable amount of time discussing the erosion of our democratic processes and the increasingly autocratic approach of the BC NDP government.

This government continues to use their majority to concentrate an unhealthy amount of power. I discuss how the last election produced a false BC NDP majority government, slightly more that 25% of British Columbians voted for them, yet they have 65% of the votes in the Assembly.

In addition, I cover a few of the specific items in Budget 2022 including climate action, primary health care, reconciliation and equity.

I was prepared to speak to this Bill at Second Reading on Thursday however, for whatever reason the Bill was pulled from the schedule at the last minute. It is likely to be back on the schedule for debate in the coming week. The potential amendments in Bill 7 could have a tremendous impact on Saanich North and the Islands. The BC NDP government is moving to give the BC Ferries Authority, the Board representing the sole shareholder (the Province), the power to issue binding resolutions on the BC Ferries Services, the Board responsible for the day-to-day operations of the corporation.

Quite a bit has been written about this Bill.

Public engagement began in Vancouver on Friday March 3, 2022 with the first presentations to the Committee.

Check out my extensive Twitter thread with my perspective on what we heard here.

Media coverage and events from this week.

← Will B.C. insist companies we subsidize stop using steel made by Russian oligarchs? Where are the investments in non-market housing options? →