Rapid Antigen Tests: Is it ever too late to better inform your next decision? 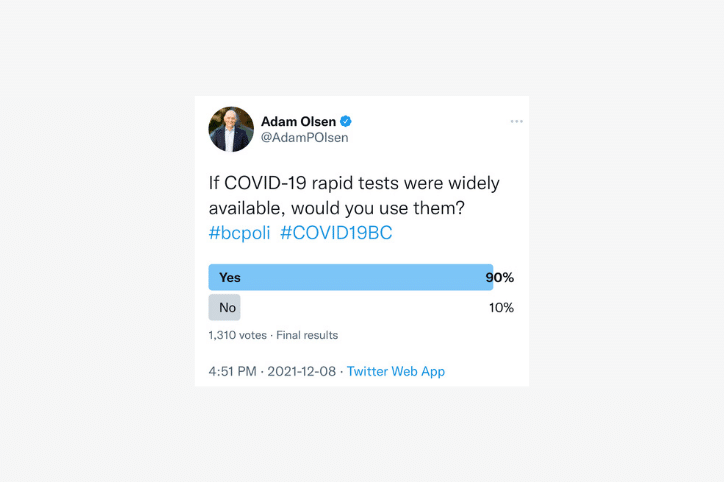 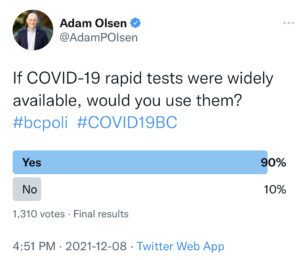 Would you use rapid tests for COVID-19 if the BC government made them available?

I did this quick poll on Twitter the other day and as you can see 90% of the 1300+ people who responded would use a rapid test.

The BC Green Caucus has been advocating for access to rapid tests for more than a year. While governments around the world roll them out as part of a multi-pronged response to the pandemic, BC public health officials have been reluctant.

In a recent article on CHEK News, public health officials gave several reasons why they have left millions of rapid tests in storage for more than a year. “Rapid antigen tests (RAT) have limited use, don’t prevent transmission of COVID-19 and are not a replacement for the vaccine.”

“During the virtual town hall, (Dr. Bonnie) Henry explained that RATs don’t prevent transmission because when someone tests positive, it is “in a sense too late” as they’ve likely been somewhere in the community, potentially exposing others to the virus.”

Millions of rapid tests are used each day in other jurisdictions to help inform people.

I have not heard anyone suggest that a rapid test directly prevents transmission or replaces a vaccine. With respect to the timeliness of a rapid test, is there ever a time that it is too late to have new information that can be used to make my next decision better?

It is difficult to understand why our public health officials have such a dislike for rapid tests.

Is it because they don’t trust British Columbians? Or, will we learn that the virus is more prevalent than we previously thought and that will damage the narrative that British Columbia is so much better than everywhere else in battling this virus?

Whatever the case, I believe rapid tests should be made available because they will be yet another tool in the toolbox, alongside vaccines, masks and good ventilation, to protect people and help inform their decisions.