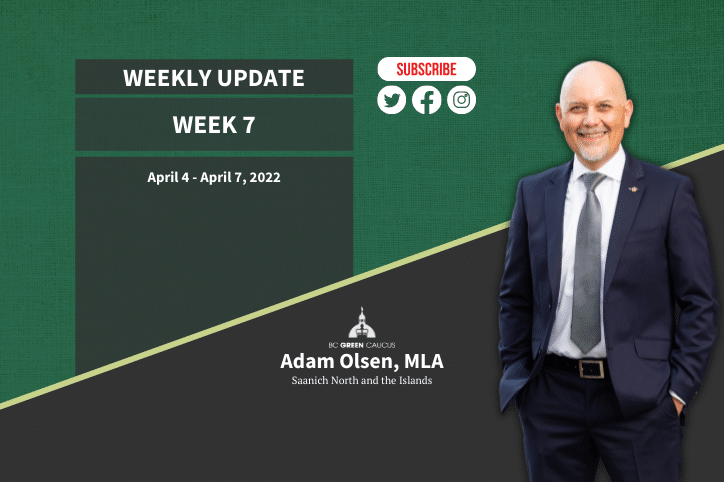 It was an extremely busy week in the Legislature. With 20 government Bills, 6 Private Members’ Bills and one Private Bill, and Budget Estimates ongoing it makes for a full day in the Assembly.

For example on Thursday afternoon, within a span of a couple of hours I was asking Hon. Lisa Beare (Citizens’ Services) about broadband on Mayne Island and for the second year in a row I asked when the province would be able to accommodate Indigenous people using their own languages in an official capacity and on government documentation, questioning Hon. Bruce Ralston (Energy, Mines, Low Carbon Innovation) about the reform of the Mineral Tenure Act, and oil and gas royalties, and recording a podcast with Tchadas Leo about life in the Assembly and the recent questions I have been asking about glyphosate spraying on British Columbia tree farms. All the while committee debate was ongoing on Bill 14: Wildlife Amendment Act (2022), even though I had questions on the important changes to that Act, I was not able to get there in time.

This highlights the demand on my colleague Sonia Furstenau and I to be up-to-speed on the full range of issues facing British Columbians. We have an incredible team in the BC Green Caucus office who effectively gather information, assimilate it into briefs, communicate where we need to be and when we need to be there.

On Tuesday, following the last regular COVID-19 update of Dr. Bonnie Henry and Health Minister Adrian Dix, the BC Green Caucus issued a statement demanding our public health officials and BC NDP government better inform British Columbians about the aerosol transmission of COVID-19, the health impacts of long-COVID, and the public health advantages of wearing well-fitting and high quality masks.

If the BC NDP government is going to remove orders that protect us from a highly transmissible infectious disease, for example making masks a personal choice, then they have a duty to better inform British Columbians of the impacts of the choices we are making.

This is exactly what the Public Health Agency of Canada did last fall, and just this week the White House issued a Memorandum on Addressing the Long-Term Effects of COVID-19 to address the myriad of long-lasting health impacts people feel after being infected by COVID-19. The memo notes,

”Individuals experiencing long COVID report experiencing new or recurrent symptoms, which can include anxiety and depression, fatigue, shortness of breath, difficulty concentrating, heart palpitations, disordered sleep, chest and joint pain, headaches, and other symptoms. These symptoms can persist long after the acute COVID-19 infection has resolved. Even young people and otherwise healthy people have reported long COVID symptoms that last for many months. These symptoms may be affecting individuals’ ability to work, conduct daily activities, engage in educational activities, and participate in their communities.”

The memo from President Joe Biden acknowledges the problem, organizes a government-wide response, requires reporting on the issue, and creates a national research action plan.

As a sixth wave of COVID-19 grows across the country, in British Columbia our public health response has evolved from “we are all in this together” to “everyone for themselves.” We are less protected than we have been in the past waves and while most infected British Columbians may experience mild flu-like symptoms the potential long-term impact of COVID-19 on our personal health is nothing like influenza.

On Wednesday, Sonia issued a call for the BC NDP government to take immediate steps to address the family doctor crisis in British Columbia. Specifically, with approximately 900,000 British Columbians without primary health care we want the government to change the fee-for-service model and expand alternative payment models to move away from the episodic care, such as that offered by walk-in clinics, hospital emergency rooms and urgent and primary care centres, and increase longitudinal care, where we get continuity of care from a health, or team, of health professionals.

On Monday, I continued my effort to raise awareness of the aerial spraying of glyphosate on tree farm plantations in British Columbia in both Question Period and through a Question of Privilege. More on that below.

In Question Period on Thursday, I asked the Minister of Energy and Minister of Environment and Climate Change Strategy about Shell’s announcement this week that they are looking into doubling the size their LNG Canada project.

In addition, I delivered a two-minute Members’ Statement celebrating Tsawout Nation’s implementation of a Marine Use Law and economic development partnership with Cascadia Seaweed.

The Legislative Assembly is adjourned for the next two weeks for Easter. The next update will be in three weeks.

On Monday, I rose to ask about the provincial government’s licensing of the aerial spraying of glyphosate in tree farm plantations in British Columbia.

Glyphosate is a herbicide regulated by the Integrated Pest Management Act to eliminate vegetation in conifer/mixed conifer/deciduous stands to maximize the value of timber harvests.

This practice allows the forest industry to classify native plant species as pests and destroy biodiversity with the narrow goal of increasing profits. The native plant species targeted are plants that Indigenous Peoples have relied on for food and medicines since time immemorial.

These species are part of a healthy, well-functioning ecosystem, they are food for wildlife and spraying glyphosate is contributing to collapsing ecosystems and is a form of environmental racism.

The provincial government’s continued prioritization of resource extraction over Indigenous rights is in direct contradiction with their promises of reconciliation and commitments to protecting the environment. And yet, the Minister of Forests continues to defend it, and the Minister of Environment sits idly by.

I raised the deeply concerning issue of oil and gas development in a climate emergency and the BC NDP’s continued subsidization of the industry.

When the consortium of multi-national corporations decided to invest in LNG Canada they only approved half the project (2 trains). The government regulatory process had approved them for 4 trains.
Now they are looking at the possibility of growing their investment to the full 4 trains.

The problem for the BC NDP is that they have only accounted for the current scale of the project in Clean BC. Even at that LNG Canada blows a hole in our climate budget.

Are the BC NDP going to continue subsidizing the project? How are they going to reach our greenhouse gas reduction targets with 4 trains operational at LNG Canada?

The BC Greens warned the BC NDP about this situation before they pushed ahead with their income tax gift to secure the final investment decision.

Tsawout First Nation has created a first-of-its-kind Marine Use Law embracing the principles of self-determination and the right to “fish as formerly” captured in the Douglas Treaty.
This has enabled Tsawout to realize economic development opportunities with Cascadia Seaweed to grow kelp in the waters in their territory.

It is an exciting development and I look forward to seeing the other W̱SÁNEĆ Nations develop relationships of their own and the provincial and federal governments accommodating them as per our commitments under the Declaration Act.

I raised a question of privilege after Hon. Katrine Conroy (Minister of Forests) stated unequivocally that glyphosate is non-carcinogenic and non-toxic. The Minister gave the impression that the science regarding the safety of glyphosate has been settled when it has not.
The Minister stated in the same breath that glyphosate use is being phased out, suggesting that she is aware of the controversy surrounding the use of this chemical, despite her statements to the contrary.

Public representatives must use the best possible science to inform decision-making. The Minister’s comments show a disregard to this responsibility.

Mr. Speaker disagreed with my use of the Question of Privilege, and my arguments in this instance and delivered a ruling on Thursday following Question Period.

I will continue to refine my use of the tools available to Members of the Legislative Assembly as I have a responsibility as a Member of the Opposition to hold government and Ministers accountable for what they say in the Assembly.

No Second Reading speeches to Bills this week.

On April 7th, MLA Furstenau and I asked questions of Minister Ralston (Ministry of Energy, Mines and Low Carbon innovation).

← With LNG Canada looking to expand, how does it fit BC NDP climate commitments? What is the BC NDP doing about growing corporatization threatening primary health care? →