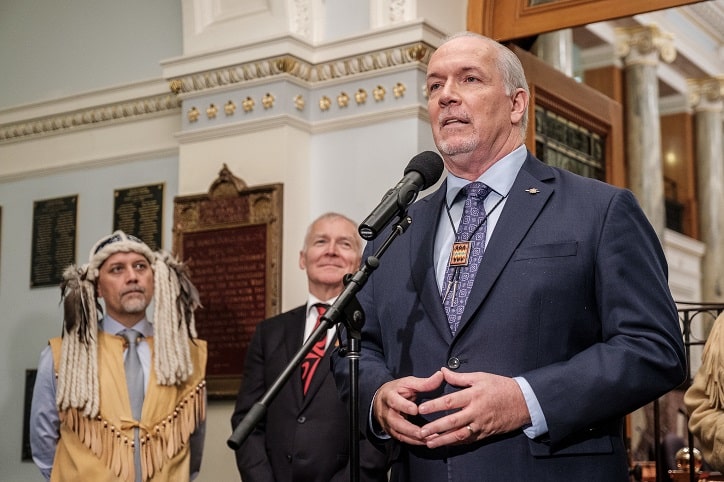 When it comes to Indigenous relations and forestry, Premier Horgan’s words contradict the actions of his government.

An exchange with my colleague Sonia Furstenau in budget estimates, exposed Premier Horgan’s willingness to leverage the principle of free, prior and informed consent, an important component of reconciliation that we committed to when we passed the Declaration on the Rights of Indigenous Peoples Act (DRIPA) in 2019, even while his government continues to use Forest & Range Consultation and Revenue Sharing (FCRS) agreements.

The FCRS were developed by the BC Liberals a decade ago and are Aboriginal rights-denying agreements. The current BC NDP Minister of Indigenous Relations and Reconciliation, Hon. Murray Rankin, is advancing FCRS agreements on behalf of the province. The objective outlined in the agreement is to “assist in achieving stability and greater certainty for forest and range resource development on Crown lands within the Traditional Territory.”

When Sonia asked Premier Horgan about a clause that limits vocal opposition to the agreement, he said, “This is not about: “Sign here and forever hold your peace.” But when you enter into an agreement – again, these are contractual arrangements – party A and party B agree to certain things. Certainly, it’s not the intention to muzzle. It’s not the intention to not speak out. I would assume, and I would expect and demand, that agreements are entered into freely and fairly. Free, prior and informed consent is a component part of that. The member is shaking his head in disagreement.”

It’s true, I was shaking my head. Not because I disagree with free, prior and informed consent, but because as the Premier knows this is hardly a fair representation of the negotiating table when the provincial government offers the FCRS. These agreements show that while Premier Horgan’s government is saying one thing about embracing Aboriginal rights, title and sovereignty, they are doing another.

In this excerpt from an article published in the Globe & Mail, Grand Chief Stewart Phillip (President of the Union of B.C. Indian Chiefs) offers a straight-forward description of what John Horgan’s BC NDP is doing with respect to these forestry agreements.

“It puts a brown face on accelerated old-growth logging and I totally reject that. I find this so offensive, preying on the poverty of First Nations people,” he said.

Instead of advancing options for conservation of old growth as Grand Chief Phillip is asking, the BC NDP continues to use FCRS agreements, also known as benefits agreements. They were designed by the BC Liberals to root the status quo Crown forestry policy. They offer just a fraction of the value of the timber resources extracted from the territory in exchange for silence. As Premier Horgan noted for Indigenous leaders who are considering contradicting him, “these are contractual agreements.” Regardless of how the Premier chooses to characterize the agreements in budget estimates, the threat of a lawsuit or the money drying up always looms.

Premier Horgan’s former Minister of Forests, Doug Donaldson, called the benefit agreements “take it or leave it agreements.” Take the money that is offered, and all the conditions in the agreement or leave the money on the table, which few Indigenous Nations can afford to do after governing within the restrictions of the Indian Act for decades.

The Premier knows full well that the conditions under which these agreements are signed are far from “free and prior” consent. For him to suggest anything else is insulting.

The Premier’s rhetoric is dangerous, yet he presses ahead anyway because it provides him cover for his total failure of leadership on forestry reform and his promises to protect old growth.

Even as Premier Horgan talks about how his administration embraces Indigenous rights, title and sovereignty, the big machine of the provincial government, which he controls, continues to grind away. As a result, many Indigenous leaders are left frustrated and exasperated – a long way from the shiny picture painted by the Premier and his Ministers.

Photo credit: “Recognizing and Protecting the Rights of Indigenous Peoples” by “Province of British Columbia” is licensed under “CC BY-NC-ND 2.0“