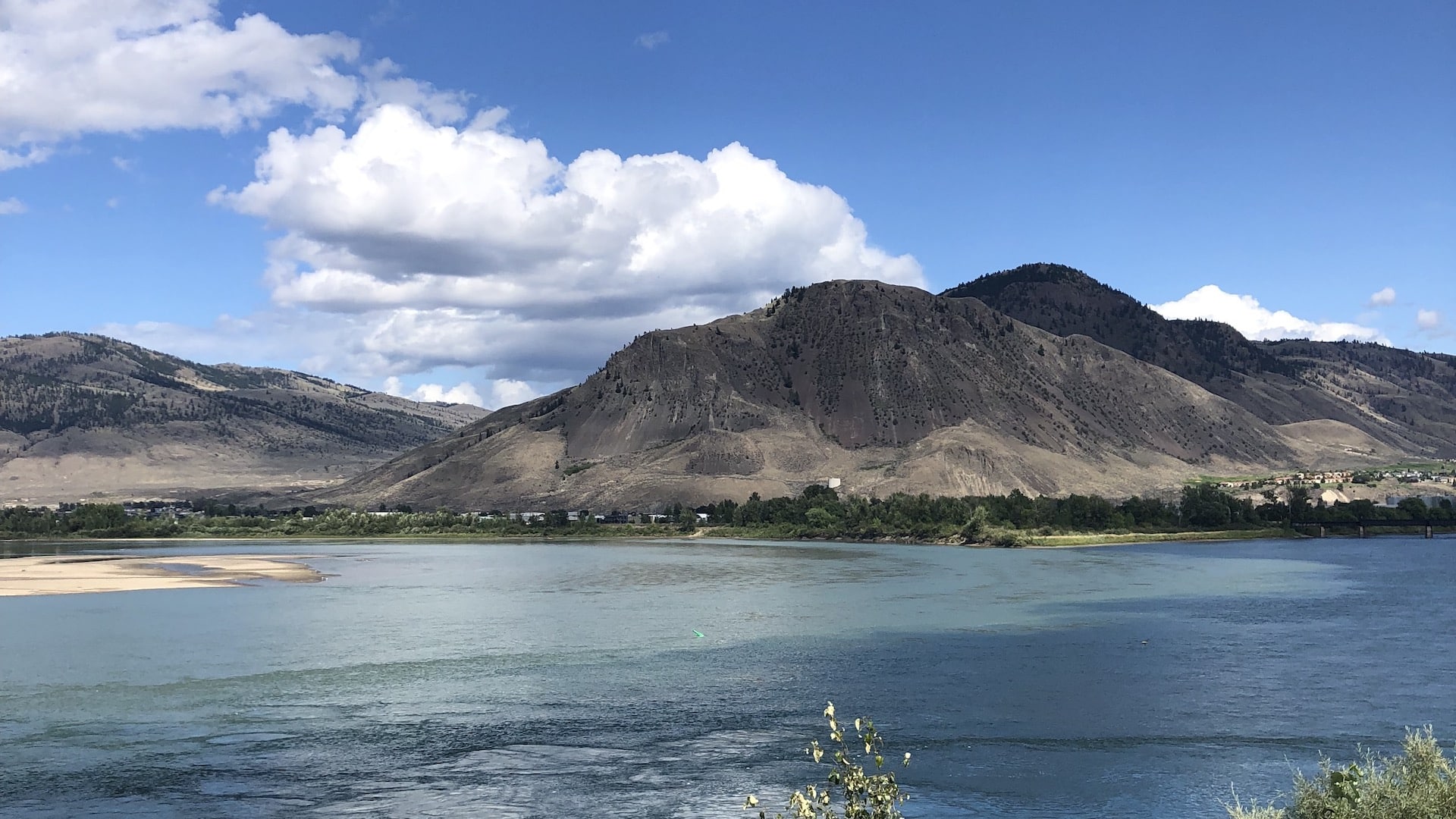 Last weekend I visited Kelowna, Vernon and Kamloops on a whirlwind three day trip that ended with a tour of the Kamloops Fire Centre.

While in Kamloops I had a BBQ with the local BC Green riding association. I took the opportunity to provide an update on our work in the Legislature and had the opportunity to meet Alan Forseth. Alan has been reposting and sharing many of my posts on his blog.

The BBQ might have been the first BC Green event Mr. Forseth has ever attended. He recorded my update and has written a nice summary. You can find the original published here or read below. I encourage you to check out his blog and a big “THANK YOU” to Alan for taking the time to do the transcription.

With regards to the salmon industry Olsen stated that continually the numbers expected to head to interior spawning grounds are, more times than not, far lower than expected.

Tongue in cheek he stated,

“Thirteen percent?  Forget about them … just leave them.  You know what?  Just let them go because it’s not worth it.”

The problem with that is that he said, is if we say that about salmon, we are in essence saying the same thing about ourselves. He then continued ….

We are saying that if we are okay to let this species, this iconic cornerstone species that holds together – that literally is a connective tissue in almost everything in this province – then what we are saying is it’s okay for us. It’s okay for ourselves… to be treated in exactly the same way.

If that’s true, then the exact opposite is true!  Bad salmon policy is bad environmental, bad social, and bad economic policy.

And so, what ends up happening, is you’ve got this situation where we’ve mismanaged these incredibly important species… species that have fed all parts of this province… whether it be human beings or nature.

And now we’ve got a rockslide that occurred last month on the Fraser River, causing difficulty for salmon to get upstream to spawn.  This isn’t the first landslide that has occurred on a river; many landslides have happened on rivers.  And because there have been resilient salmon runs year, after year, after year, the whole cycle for salmon has survived.

Unfortunately, with each one of these instances, we are creating situations where the entire system becomes so fragile that now they’re looking at a really devastating state.

We can no longer operate in this political sphere.

The federal, provincial, and local governments must move away, in my opinion, from the politicking that’s happened.  The pendulum swings from left to right… good and evil… from us and them, good and bad — however you want to look at it. They must get away from that political narrative and to governing.

And there’s a difference… a really important difference… between politicking and governing.

Governing is about making decisions about good salmon policy, and it’s saying to those people who are all fighting right now over who gets to gut the last fish – it’s saying to them, “We are going to make a decision and there’s going to be some pain involved … and you might not like it.”

But the reality is that we are in a situation where I don’t know that we can afford to take any more fish – and that’s not a very popular position to take on all accounts – but that’s governing.

The reality is your Thompson River Steelhead that come up into this area – the Thompson River steelhead – are the victims of just this kind of decision making.

The body that makes the decision if a species should be on the endangered list or not (COSEWIC) said, “No, you should definitely have this fish on it. You should list this fish!”

I mean you could name each individual fish, that’s how few there are, that’s how sad the situation is.  A hundred and fifty… fifty… eighty-five. We could go through the list and name each one.

I ask questions about this in Question Period and the province says it’s federal… the federal government says well it’s provincial government that regulates the recommendations on the Chum fishery, which they call a sustainable fishery; they’ve given it that designation.

The Chum fishery might be sustainable but the bycatch, what they’re killing, is the few remaining Thompson River Steelhead. So, they get caught in this situation – clearly the difference between politics and governing.

Politics stops us from making the governing decisions that we actually need to make — to be responsible.

For us as politicians, to look after the public interest, we have to be prepared to make the decisions that are tough and that the public may not like.  The reality of it is, that when you get down to fifty something, or eighty something, or a hundred and something steelhead, you’re dealing with populations that are very much on the brink of extinction from the planet forever… and that’s just not acceptable.

And forestry, is another one of those foundational industries like fishing, in our province.

It’s 100 percent bad. There isn’t anyone who’s saying, “Yah we’re doing okay.” That is until you get to government.

And they’re like ahhhhh …. “Don’t worry about it, it’s great. Never before have we managed forests as well as we’re doing right now. In fact, we haven’t had more forests than we have right now.”

The numbers that they use to talk about old growth on Vancouver Island — you absolutely have to stretch your imagination — you have to include tiny little high alpine trees that are never going to be cut – they’re hanging off a cliff and they’re 250 years old and they’re this big (stretching his hands approximately a foot apart), and they’re way up on the top of a mountain – that’s an old growth tree.

And they’re including that into the count in order to boost up the numbers.

So, we are in a situation where politics has taken over and we are liquidating our forests.

They don’t like that term, but I can’t think of a better way to describe what’s happening. It’s absolutely devastating — you cannot describe that as sustainable forestry.

And now we’ve got a situation where mills are closing … and we’re trying to wrap our head around exactly what’s going on and how to make sense of it.  How to transition where we’re at right now — which is basically just taking it all — at a time when we’re looking at climate change, and this crisis at a global level.

The only way I can describe it is insanity, and the result of politics overtaking our governments.

At this point Adam spent a bit of time talking about the years leading up to the election … being able to follow bills through their inception to the end passage … and touring the province as the Interim leader to find out about the various areas and issues.

He spoke about having had a chance to learn, and so that when elected and in a minority government situation, he didn’t feel completely like a fish out of water … just a little bit.  And then he went on to talk about being part of the opposition, but working with the BC NDP through the Supply and Confidence agreement.  Then he got back to what really spoke to me … governance and politics.

I’ve been playing with this notion, trying to figure it out and unpack it, and how we can actually change it, to get us away from this.

One of the ways were two private members bills which, as far as they could tell, were the first private members bills passed in the province. One was on the Business Corporation Amendment Act … and second was an act that allowed people who are victims of sexualized violence to break their fixed term leases if they were in that unfortunate situation.

So, these are not the two first good ideas that have come up by a private member, but this is the first time in the history of our province that the government has agreed to debate these bills, and then to pass them. They passed unanimously.

We are moving to a government that is focused more on governance. We still have a long way to go, but this is the path that I hope we are moving on, and towards.

This is how democracy should work – this is how a proper functioning legislature works.  A good idea is put on the floor, it’s considered, it’s debated, it’s voted on, and it improves legislation, and that’s what the BC Greens have been able to bring to the BC Legislature on a day to day basis in the functioning of your democratic institution.

Those are wins for the people of British Columbia – wins for you – and that’s the reason why I think we need to have a diversity of voices in the legislature.

Olsen spoke about meeting with First Nations people that afternoon, about how that had looked, and then he went on to say that they are coming to him and the Greens because…

“We provide another doorway into government.  Because they know that if I start Tweeting about this, I’m an annoyance to the government.

And if I do it with a smile on my face that I’m really a major annoyance.

And so, this is why having more voices, less consolidation of power, more fragmentation of power from across all 87 MLA’s is a good thing.

And by honouring the people of this province, then we begin to honour the ecosystems, and nature, and all of those other things that help provide a healthy place for all of us to live.  And right now, we are doing a poor job of honouring that whole spectrum of things that we need to be honouring.

And so, what I hope you are able to take away is that we as a caucus operate on a different kind of vibration than our colleagues do… and we’re trying to take the system that has been evolving into a “service centre of politicians and political power mongering,” and turn it back out and say… ‘This is actually an institution that should be operating to serve you, and us, collectively.”

And knowing that in the end, if we do that job well, then the political part of it takes care of itself.

At that point, Adam took things to a Q and A where he spoke of a number of things including rural forestry communities that have been hit with closures and lay-offs … building infrastructure projects … and what he called living infrastructure projects (giving credit to Skeetchestn Band Chief Ron Ignace for that definition) which would be remediation of the land, the fish of the oceans and rivers, and from logging, mining and other resource development … and how perhaps many of those transitioning from forestry could be part of that.

It was a good evening … and an inspiring conversation from Green Party MLA Adam Olsen, which I was delighted to hear.