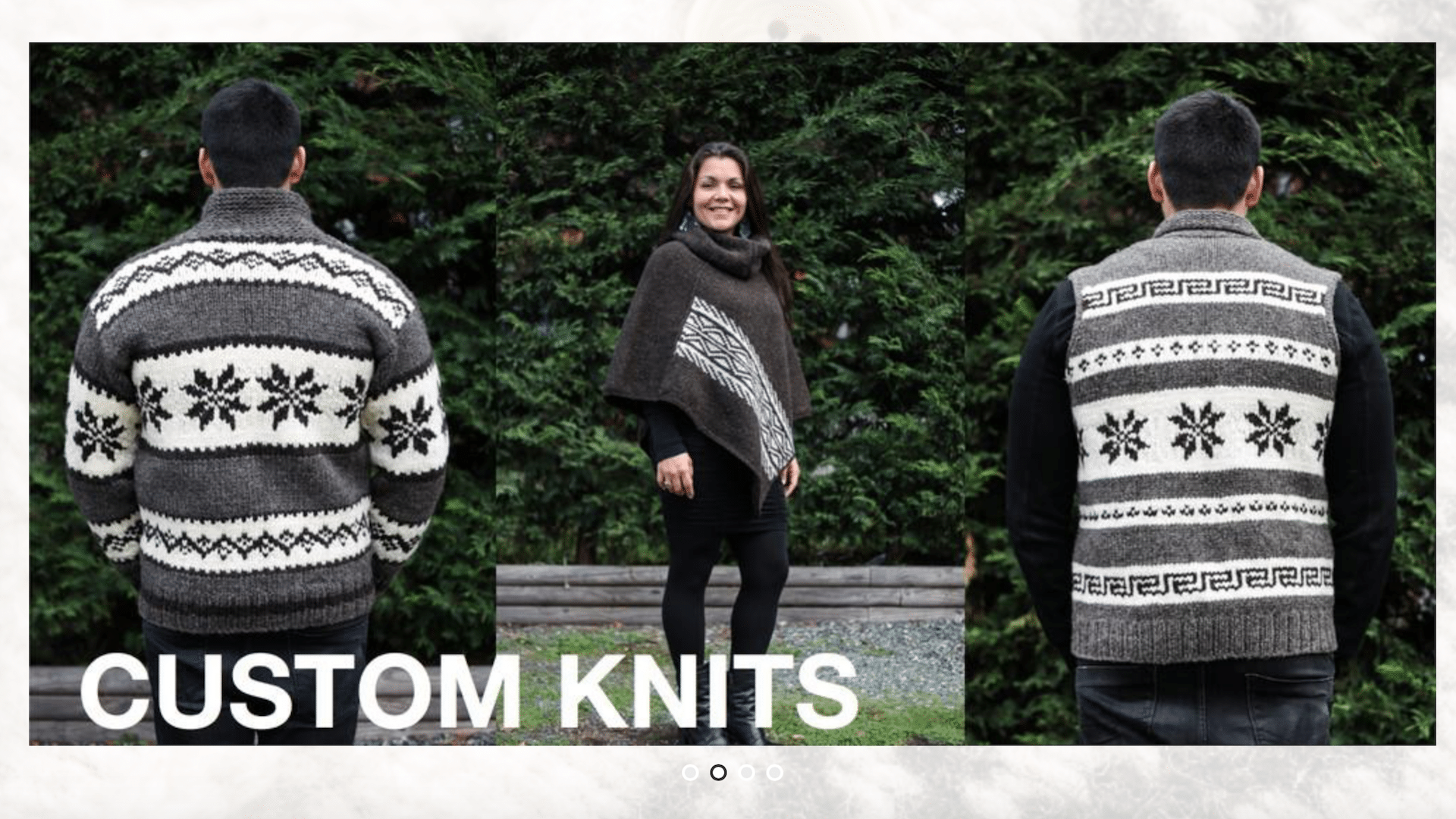 A little while back, I wrote about a singular memory I have of being surrounded by potted chrysanthemums at the door of a long-gone greenhouse on my families property in Brentwood Bay. It’s one of my earliest and most vivid memories, largely, because my grandpa Ernie is in it. It’s the day he advised my parents to name their businesses after the sacred mountain ȽÁU,WELṈEW̱, or Mt. Newton as it is known today.

While my grandfathers were both linguists, Grandpa Don an old-school preacher-man, and Grandpa Ernie, one of our elders whose perseverance preserved the W̱SÁNEĆ language SENĆOŦEN, I come from people who work with their hands. My maternal grandparents perpetually had soil under their fingernails. From them came our landscaping, garden maintenance and moss hanging basket business that we called Mt. Newton Gardening. My paternal grandmother, Laura, was a Coast Salish knitter. Her innovative needles produced hundreds of beautiful hand-knit products, from the sweaters, vests, toques, socks and anything else she designed. From her work came a business that we called Mt. Newton Indian Sweaters.

The Coast Salish knitters are talented tactile technicians. Throughout the 20th century, our knitters knitted to survive and that was not always easy, just like the 20th century was not easy for Indigenous people in Canada. Relying on the price offered by the buyers in the city to feed and cloth large families was definitely a challenge. My mother carries many stories of how our mothers and grandmothers were given the lowest possible amount for their toils.

My parents decided to do something about the injustice and so that was the beginning of Mt. Newton Indian Sweaters. They created a local fair trade market place for Coast Salish knits, commonly known as Cowichan Indian sweaters, even though knitters from Nanaimo to Saanich hand-produced the apparel. We bought wool from a mill run by the Modeste family in the Cowichan flats, and we sold it to the knitters for little or no profit. And, we purchased their finished products for many times more than what they could sell them for in the city. In the heyday we changed the market. We changed it to the point I remember the traders from city sheepishly coming out to our sweater shop to buy sweaters off of us to fill their orders.

When I was a boy I was also surrounded by bags of wool and sea of knitted apparel in our sweater shop that doubled as an uninsulated floor hockey rink. My parents went on the road with our products. When we were in the Okanagan in the late-70’s and 1980’s they would throw open the doors of their van in a community park, word would spread, and soon enough we would be sold out. Later, they met a gentleman who owned gift shops in the Canadian Rockies and many of our west coast sweaters were sold to visitors from around the world.

The Coast Salish people were working with wool long before the arrival of the European. We were weavers. However, when Europeans arrived on our shores they brought with them knitting needles and a palate of geometric designs that our woolworkers quickly adopted. What our knitters created from that, colloquially known as the Indian sweater, has become a cult classic.

Then in the 1990’s, as trade with Asia began to open up, the entire wool industry was devastated by cheap, light-weight, rain-wicking fleece. Wool mills, still largely industrial revolution age technology, were abandoned and farmers began composting their wool because their market had crashed. Many of the Coast Salish knitters hung up their needles and went off to post-secondary school. It was at this point that the Olsen family shut down the business.

But then someone at the 2010 Vancouver Olympic Committee, or the Hudson’s Bay Company (HBC), decided to outsource replica Indian sweaters from Asia for the Vancouver Olympic Games. Well, that caused a firestorm of criticism and an outpouring of frustration. One of the redeeming qualities of the Coast Salish knits is their incredible longevity. If you can keep moths away then they are the most prized inheritance from a parent, grandparent, aunt or uncle. So, that is when people started renewing their relationship with their Coast Salish knits and they began digging their old sun-bleached sweaters out of their closets.

In an act of defiance against the HBC, folks began looking for a knitter to produce something new for them. That was not easy because, in the 20 previous years, most of the knitters had passed and few of their children continued the work. In the ensuing years, my mother, Sylvia Olsen wrote an award-winning book called Working with Wool: A Coast Salish Legacy and the Cowichan Sweater, and, as a result, news outlets were interviewing her about the faux pas of the Olympic-sized decision.

So my mom, my sister Joni and I got together in 2010 to talk about reviving the tradition and creating a new more modern edition of the Coast Salish knits. Salish Fusion Knitwear was born.

We struck up a relationship with Custom Woolen Mills in Alberta to produce the classic white, brown and three grey blends of natural western Canada wool that were a signature of the Cowichan-inspired product. Just as in the day of our grandmothers, we began to innovate using hand-operated knitting machines to produce bolts of fabric that were later turned into shawls, handbags and virtually anything else my mom and sister’s minds could design. They began experimenting with felting and fulling processes that added a distinguished quality to our high-end wearable Coast Salish wool art. Finally, we put our business online and in the holiday craft fairs in Victoria and Vancouver. We couldn’t make enough product to fill the demand.

In the early days, Joni and I pitched our business on the CBC hit show Dragon’s Den, where we were briefly featured in January 2013 and we even knit Prime Minister Justin Trudeau a replica of his father’s sweater featured in an early 1980’s Christmas card. We hand delivered it to him when he visited UVic.

We are still making custom products. In recent months our website has been taken down and our family is going through another phase, the political phase. With both Joni and I working as elected officials we have a lot on our plates so we are taking a bit of a hiatus from producing large quantities of stock. However, when my nephew Joey was asked what he was going to do when we grew up, he said he is going to take over his mother’s knitting business. There is hope that Coast Salish knits will be passed on from our generation to the next, and our kids’ needles will be made light by the passion and innovation of their grandmother and great-grandmother.

← Column: Can't see the forest for the trees Cooking with music! →