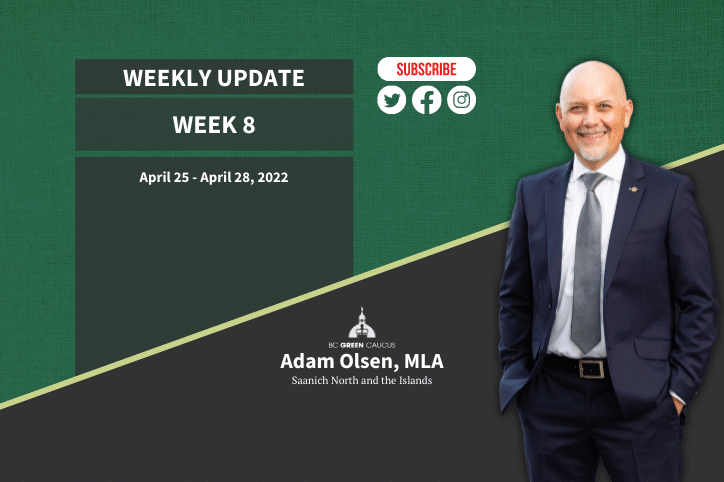 Welcome to my weekly update for May 1st, 2022! Following a two-week adjournment to accommodate the Easter long weekend, the BC Legislative Assembly resumed the Spring session this week.

It is always a shock to the system. The pace of constituency and legislative work is very different and it usually takes a few hours on the first day back to switch gears. Lady Minto Hospital Emergency Department

Really this week was a tail of two halves, Monday and Tuesday were much lighter than Wednesday and Thursday. On Tuesday, I was out of the legislature in the morning as I was attending the ground-breaking ceremony of the new Lady Minto Hospital Emergency Department. Salt Spring residents are lucky to have the Lady Minto Hospital Foundation. They have fundraised more than 70% of the $10 million (+) capital costs. The other 30% is coming from the Capital Regional Hospital District (CRHD). Island Health is committed to operating the new expanded department, and it remains an unfortunate reality of this project that the provincial government has not contributed anything to the capital costs of construction. I encourage you to write Minister Adrian Dix to encourage him to make a contribution to this important project. Send Minister Dix an email at HLTH.Minister@gov.bc.ca. Please copy me at Adam.Olsen.MLA@leg.bc.ca. I will continue my advocacy on this important issue.

On Wednesday in question period, I continued the BC Green Caucus work on the primary healthcare crisis in British Columbia asking Minister Dix about the potential threat of the corporatization of our primary healthcare system with the growing footprint of privatization of services by the likes of Telus and Harrison Healthcare. On Thursday, I switched gears in question period by asking Minister David Eby about the provincial governments response to the continued financialization of rental housing by real estate investment trusts (REITs).For my two-minute Members’ Statement I highlighted the National Day of Mourning for workers who have been injured or died on the job. We know that WorkSafe BC needs to be reformed and the provincial government needs to prioritize better supports for injured workers. Unfortunately, the pace of change has been far to slow.

In addition, 15 months work comes to an end as the Special Committee on Reforming the Police Act tabled our 100-page 11+ recommendation final report. This was incredibly gratifying and collaborative work and I am proud of the outcome. If you have any questions or concerns, please provide your feedback at Adam.Olsen.MLA@leg.bc.ca or 250-655-5600.

Nearly 1,000,000 British Columbians do not have access to a family doctor or team of primary health care practitioners. More are notified each day that their doctor is retiring or shutting down their practice due to exhaustion and frustration.

There is a lurking threat that the BC NDP is doing nothing about, large corporations are positioning their business interests to exploit this tragic situation and entirely disrupt the business model of primary health care away from the equitable and universal program funded by government to private healthcare driven by profit and available only to British Columbians who can afford it.

While Premier John Horgan attempts to deflect responsibility and shift attention away from his government’s failed healthcare policies, it appears things are about to get much worse before it gets better.

In many cases, they are renovicting the tenants and dramatically increasing rents. This is another example of the financialization of housing and it is putting many renters housing at risk.

These companies must put profits for their shareholders ahead of housing affordability. As Michael Brooks, CEO of RealPac, an association representing the largest REITs in Canada says,

This is a growing problem facing tens of thousands of British Columbians. I asked Minister David Eby what he was doing about this looming threat? You will be interested with his answer.

April 28th is the National Day of Mourning. This is my 2-minute Members’ Statement on the important issue of worker safety and the much needed reform in WorkSafe BC.

For the past 15 months I have been honoured to participate in the Police Act Reform committee.

We were given a broad terms of reference to review the entire policing system in British Columbia and provided 11 recommendations for transformational change.

This was a collaborative process between all Members on the committee. Noting transformation may take several years, all Members of the Legislative Assembly carry a responsibility of ensuring we move quickly to establish a process for the next steps for police reform.

In Bill 16, the provincial government is seeking to give the British Columbia Transportation Financing Authority the power to purchase land to allow for more transit-oriented developments.

This is a positive change that has the potential to create more deeply affordable housing near transit routes. With inflation creating pressure on all aspects of our lives it is important that we are creating livable communities and this could be a step in that direction.

Of course, purchasing the land is just one aspect of creating more affordable housing. We need strong policy in place that ensures the provincial government is investing in non-market solutions so that public money is not further inflating the red hot housing market.

Special Committee to Review the Freedom of Information and Protection of Privacy Act
You can find the transcripts and audio from the session here on the Committee website.