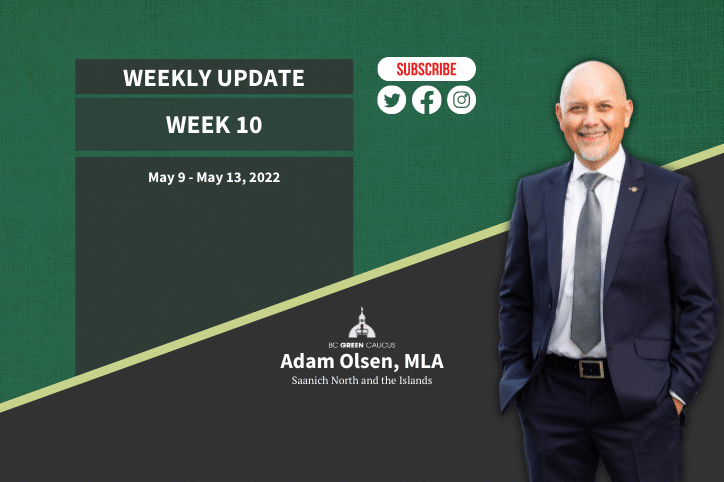 This week, I attended the first MLA reception since the pandemic started, joining the BC Police Association members on Monday evening. It was an excellent opportunity to hear from representatives of the municipal police services about the transformation we recommended in the Police Act committee. I was pleased to hear that our report was well received.

Later Monday evening we joined nurses and the BC Nurses Union in a candlelight vigil. Our healthcare system is under extreme pressure and near collapse. The focus over the past few months has been on family medicine and this vigil was an important reminder of the situation facing nurses every day. Chronically understaffed, managing many more patients than they should, facing increased violence at the workplace and exhaustion. We must honour the critical role nurses play in making our healthcare system work! I raise my hands in gratitude to all nurses in British Columbia.

In Question Period on Wednesday, I asked Hon. Mike Farnworth when he is going to begin the transformation in policing and implement the recommendations of the Police Act committee. I also asked about a comprehensive review of the Mental Health Act. Our government has spent hundreds of millions of dollars on new programs and services, but the Act has not been substantially amended since the 1990’s. A review of the Act should have been the first step, not an afterthought. The Mental Health Act needs a public, all-Party review now!

Thursday was Moose Hide Campaign Day. It was the 11th year of the grassroots campaign for Indigenous and non-Indigenous men and boys to commit to standing up to violence against women and girls. In Question Period, I asked the government why it is they have invested so little into our response to the National Inquiry into Missing and Murdered Indigenous Women and Girls. The government has only allocated $5.5 million dollars into the work, and as the tragic news of Chelsea Poorman is reported, clearly our response and investment is far from good enough.

Also on Thursday, I had the honour of reading a short statement prepared by Stephen Hume on the passing of his father Jim Hume, the longest-services member of the British Columbia Press Gallery. Mr. Hume passed away on April 13, 2022 at the age of 98.

I am still processing the news from Friday. $800 million on a new Royal BC Museum. I’ll have much more to say about this decision in the coming week, but it demonstrates how out of touch this government is. With British Columbians struggling to keep up with inflated costs of basic needs like housing, transportation, food, and a million British Columbians without a family doctor, spending nearly a billion dollars on a new museum is not a good decision. I will explore other aspects of this decision as well, such as the message it sends to Indigenous People in British Columbia.

Wednesday, May 11th, 2022
It has been 25 years since the British Columbia government did a comprehensive update of the Mental Health Act.

In 2021, the BC NDP made a record investment in mental health programs and services. However, the Act governing them is outdated and based on ideas and values from a previous generation.

Another Act that needs substantial transformation is the Police Act. I was on a committee that recommended that transformation and it is important that government not lose momentum on the important work we did.

In question period I asked when British Columbians will see transformational change in the Mental Health Act and the Police Act.

It is Moose Hide Campaign Day. The grassroots campaign is for Indigenous and non-Indigenous men and boys to stand up against violence against women and children.
As the National Inquiry on Missing and Murdered Indigenous Women and Girls found, instances of violence often increases around resource development sites.

Every year our BC NDP government invests billions of dollars in projects like the Site C dam, fracking, and LNG. Yet, in 2021 they only put $5.5 million dollars into B.C.’s Path Forward response to the Nation Action Plan.

It is clear where the BC NDP’s priorities are. While their Members continue to wear the Moose Hide Campaign pin, the resource development projects they are subsidizing continue to cause inconceivable harm to Indigenous women and children. Simply, not good enough!

On April 13, 2022 Jim Hume passed away. He was an extraordinary, and longest-serving, member of the British Columbia Legislative Assembly Press Gallery.

I am grateful to have the opportunity to honour the memory of Mr. Hume.

In the first Bill addressing climate change since the BC NDP got their majority government, the Low Carbon Fuels Act is upgrading the Greenhouse Gas Reduction Act (2008).
With 37% of the greenhouse gas emissions in British Columbia coming from transportation, our pathway to meeting our greenhouse gas reduction targets must include lower carbon intensity in transportation fuels, including personal vehicles, marine and jet fuel.

This policy framework is complex, establishing a credit program to incent industry to make better choices. Incentives are an important tool, a carrot, but where is the stick? Those are also necessary tools for government to use.

With oil and gas lobbyists meeting with government officials daily, sometimes multiple times a day, it’s no surprise that the BC NDP have leaned much more toward carrots than sticks.

Check out my exchange with Hon. Katrine Conroy in Budget Estimates for the Ministry of Forests.

A reminder from my team in the Saanich North and the Islands of the consultation for Budget 2023 has already started.

Every year, the Select Standing Committee on Finance and Government Services holds a public consultation on the next provincial budget.

This year, the consultation will take place between May 30, 2022, and June 24, 2022. British Columbians will be invited to share their thoughts, ideas, and priorities.

← MLA Column: Police Act committee delivered needed change Why is BC NDP investing $800 million on a new museum and only $500,000 in repatriation? →